One of the scientific tasks our team will undertake during the Bell Island Mine project this February is collecting samples of bacterial mats, sediment, and water at various collection points throughout the exploration area, and sending them for analysis to Dr. Cheeptham, in the microbiology department of Thompson Rivers University, B.C.

You’d be forgiven for thinking that because daylight does not penetrate caves and mine shafts, these environments support no life at all. However, this is far from the truth. Life will find a way to thrive even in conditions that seem harsh to surface-dwellers. Certainly in the dark, underground environment of Bell Island Mine, life is tough and organisms must find an alternate energy source to sunlight. But we noted very prolific bacterial growth on equipment and fixtures during our initial exploration.

Fascinated by this, we contacted Dr. Cheeptham, who has several papers published on cave life. Our hope was she had a grad student willing to research exactly what’s made its home deep in shaft #2. Luckily she agreed. Thanks Ann!

A diving company is getting ready to launch an unconventional trip in Newfoundland: an underwater adventure in the abandoned Bell Island mine in the middle of Conception Bay.

The mine, which closed in the mid-1960s, is a key part of the history of 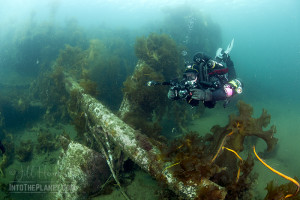 Bell Island, which is also the site of several Second World War shipwrecks that have long fascinated divers.

During the war, a German U-boat sank the SS Saganaga and SS Lord Strathcona in 1942, and later that year sank the SS Rose Castle and the free French vessel PLM27.

Now the focus is on the abandoned mine itself.

The Hidden Geography of Newfoundland from Jill Heinerth on Vimeo.

“It is a dive into history because of course there [are] a lot of artifacts left down there and you’ve got that great sense of adventure, so you have that recipe that these divers are coming to look for,” said Rick Stanley, owner of Ocean Quest, adding that work has been ongoing to get ready for the big dive in tunnel two, planned for mid-February.

“It’s not just a tunnel, it’s an underwater museum. There’s so many things to see down there.”

Stanley said this kind of destination doesn’t yet exist in Newfoundland and Labrador, and will hopefully appeal to history and diving buffs around the world.

The spot where the dive — called Mine Quest — will happen is a section of the mine closed in 1949, ahead of the mine’s complete closure in 1966.

Stanley said there are rails, an iron ore car and tools still in the mine.

Stanley said plans for the mine have been underway for a long time, but the death of an American diver at the site in 2007 derailed them.

According to Stanley, his friend Joe Steffen died from an air embolism, caused by a tumour, that killed him during a dive at the mine.

“Of course that slowed down the whole process of getting Mine Quest underway … it was a sad day,” said Stanley. “It could have happened anywhere, not necessarily in that mine.”

Stanley said despite the loss, his friend was a big supporter of the project and would have wanted it to proceed.

Not for just anyone

While the group is hoping to attract professional divers from all over the globe, Stanley said it’s not for just anyone.

“You go down there, you must be ready for it and of course you must meet our criteria before we’re even going to let you down there to begin with,” he said.

“It’s not like an opened dive site that you can jump in and take your chances … There’s a check and balance to it all.” 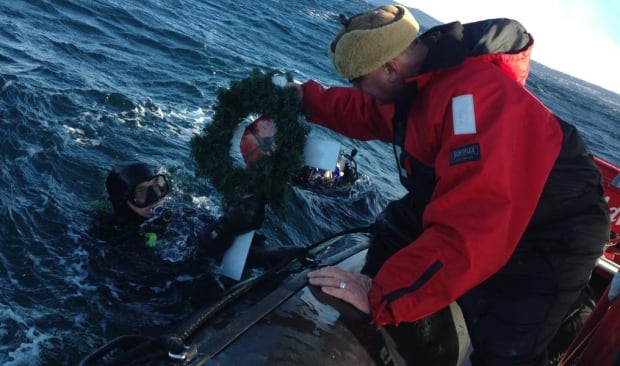 A crew of divers with Ocean Quest took a wreath underwater to lay at the site of shipwrecks off Bell Island on Remembrance Day in 2014. (Philippe Grenier/Radio-Canada)

The Mine Quest adventure’s appeal is the ability to dive in an abandoned mine and a shipwreck all in one place.

“They have that diversity to come here for a week’s holidays,” said Stanley.

“We’re not expecting them to be coming in droves … but we are expecting that this is going to be a great addition to what we’ve already been successful doing with the Bell Island shipwrecks.”

Drs. Neal Pollock and Dawn Kernagis are setting up some exciting studies for the Bell Island Exploration Team. The information gathered from the dives will be added to Dr. Pollack’s extensive life’s work on decompression, thermal issues and human performance during repetitive dives.

The plan includes monitoring divers for bubbles in the heart post-dive with ultrasound readings taken at 20 minute intervals for two hours. It takes three to four minutes to complete each scan, so the divers will remain in the area under close watch throughout the sampling period. Pollock would also like to look for blood markers of decompression stress with standard blood draws. This would normally be one pre-dive and two (rarely three) post-dive on selected days. The volume taken is small, but there can be quite a few draws.

Dive team members will participate voluntarily in the study and should benefit from learning about the effectiveness of their personal decompression strategy.

In addition to the blood draws and ultrasound, subjects will participate in a 20 minute battery of physical fitness and status measures prior to the start of the study dives.

The team, although small, is diverse with a span of ages, both genders and a variety of fitness levels. Some participants will use external heating devices and others plan to soldier through with no additional heat provided for their dives. 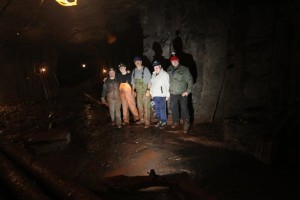 Rick Stanley reported in from the building projects in the mine late last night:

Another successful day with another 1/3 rd done with volunteers Mark and Marcia McGowan, Johnny Olivero, Nick Dawe and myself. Belle Islands Staff Volunteers Bonnie and Tom Spracklin and Teresita (Teddy) McCarthy all on hand.

We cleaned up big area where large picnic table will be going along with an area around the Rib 32’ for a gear set-up work bench and storage. We cleaned down walking area down the slope to the water’s muddy edge. We installed steel supports over a deep trench to attach our platform and for a gangway to floating dock. ( Docks and platforms yet to be built).

Lunch today was prepared by Marcia in the cafeteria of the mine….fantastic sandwiches cakes and cookies….and she’s coming again tomorrow with special chilly…..going to keep her on…and you should see her moving iron ore…the miners were turning over in their graves today…hahaha!

In the afternoon we continued working on bridge area and cleaning slopes… We edged the walkway with iron ore chunks and old Powerline posts that were nearby for safety to keep folks on track walking down slope. We cleaned away iron ore off old water pipes as they are artifacts and to have that nice line looking down the shaft to the water.

Good day had by all and tomorrow we work on lighting, diverting water running down slope and installing a water pump and hose for wash-down area. Also beautification will continue ;-

Projects of this type are realized in part by volunteer efforts: each team member making a significant personal commitment of time and expertise. Most are also largely self-funded, and without team members making the required financial investments to cover travel, equipment, and other expenses, projects such as this simply would not happen.
However, another important contribution to the viability of any endeavor on this scale is made via the generosity of many companies and equipment manufacturers who support both individual team members as well as the team as a whole.

Many thanks to the folks who have supported and sponsored me in the past, and for this particular project:

O’Three Ltd.
Come in from the Cold
Dorset, UK…
Drysuits, and Thermal Protection

ScubaForce:
Made by Divers for Divers
Florida, USA…
SF2 eCCR, and Reels

Volunteers Mark ( Magoo) McGowan, John ( Johnny O) Olivero, Nick Dawe, Kyle Morgan and Rick Stanley were hard at work in Bell Island Mine #2 preparing it for the upcoming cave diving expedition in February. Ultimately, they intend to build the infrastructure that will permit safe cave diving operations for qualified visiting divers. Leaving in the early morning hours, the team took the ferry from Portugal Cove to Bell Island and drove to the access point at the Mine #2 Museum. All equipment had to be hand-carried 750 feet down the shaft to the future site of the diving platform. They installed temporary lighting and held safety briefings with master craftsman and Safety Advisor Ron Reid. Reid and the team also identified and removed some loose rock from the ceiling and walls before the heavy work began after lunch. With a solid day of manual labor using shovels and pick axes, everyone developed a new respect for the efforts of the men who worked the mine for a lifetime.

The exploration team wishes to thank all the hard working volunteers in addition to the dedicated staff from Bell Island Heritage…Teresita ( Teddy) McCarthy, Des McCarthy, and Tom Spracklin.

The team at Ocean Quest Adventures is hard at work preparing for the upcoming cave diving expedition that will establish safe guidelines and infrastructure for future visiting divers. An amazing group of volunteers is putting in lot of hard labor installing the following:
1/ Extending waterline by aprox 1000 feet for controlled water hose and electrical for lighting.
2/ Cleaning off 125 feet of mineshaft 4-6 feet wide for a walkway to staging area. END_OF_DOCUMENT_TOKEN_TO_BE_REPLACED