Good friends will share a toothbrush when they need to. Even better friends trudge through the snow to buy one for each friend unable to make it home in the snow squall. (Thanks Cas Dobbin) 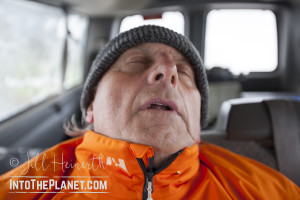 We lined up for the ferry off Bell Island at 6pm thinking that an early night would help facilitate an early start tomorrow. Unfortunately, a squall has prevented the ferry from taking us back to Portugal Harbour. We’re stranded on the island and have started to barter survival items. I thought I could barter a headlamp and a full oxygen tank for the morning dive. Others offered fresh dry socks.

Steve Lewis, Cas Dobbin and Sabine Kerkau and I are dressed in some variation of dry suit undergarments and ski jackets. Steve thinks that he looks like he just popped out of a New York dance club. We have called around and found an inn that will take us all. They are trying to find a cook and some food, but we have a small convenience store that is still open as a backup plan.

Neal Pollock and Stefanie Martina from DAN are much cleaner than any of us! Rick Stanley took a couple of slips on the muddy floors today, so he wins the grime contest. Mark McGowan flew in from Curacao this morning and came straight to the mine to help out. For his efforts, he has joined in the mass stranding too.

But seriously, if I ever had to be stranded with a group of people, this is a really nice one!