This morning the team traveled to Villa Nova School in Conception Bay South and had an assembly with the sixth grade students. We brought lots of cave diving equipment and shared some of the results of the expedition thus far. Neal Pollock enthralled the kids with pictures of a beating heart from his ultrasound results. It seemed as though every kid had great questions including specific queries about our diving technology, scary encounters as well as a keen interest in whether we had dived with sharks. 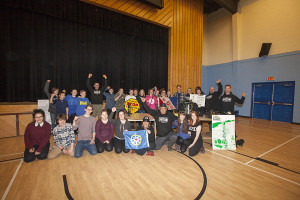 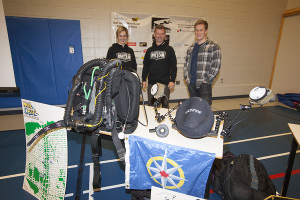 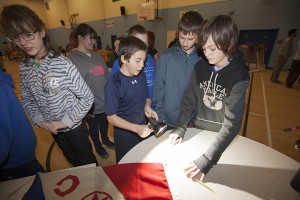 On the ferry across The Tickle, Neal Pollock and I were interviewed by the Voice of the Common Man (VOCM) radio station in St. John’s. We also got word that the CBC was so taken by our project that they have extended their broadcast into a three-part series and web special that will air next week. 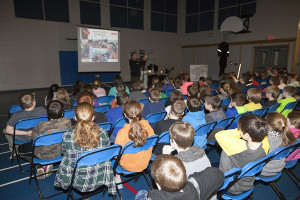 Thanks to Tonya, the St. Michael’s High School Principal, we had a quick lunch at Dicks’ Fish and Chips and said one last thank you to the owner Mary who has been so kind to us. The entire school gathered in the gymnasium for our afternoon presentation. The school AV Club and Radio Club did an impressive job setting up the equipment and running a professional show. They recorded the presentation for local radio. After a few questions, we invited the kids forward to the stage to touch and feel the gear and ask more questions. That informal session was very rewarding. I could see the recognition from many of the kids that they could do something incredible with their own lives. Gemma Smith demonstrated the rebreather to a large group of kids who were full of questions. Daniel Rees, a young maritime archaeologist from Conception Bay South was a shining role model of achievement for the kids. He answered questions about archaeology and about how to get into university.

More than anything, I think the Bell Island kids left our presentation with a new sense of place and pride in their community. We extended our thanks to them for hosting us in such a remarkable place