Exploration diver/underwater photographer Cas Dobbin is an engineer in the oil and gas industry. After many dives, he was able to piece together a concept of how the mine might have operated. He offers:

The mechanical workings of the #2 mine consist of several components, dewatering, compressed air, and utilities. 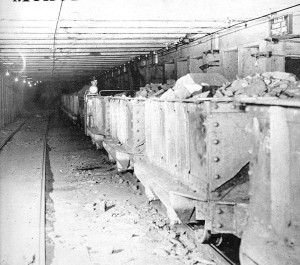 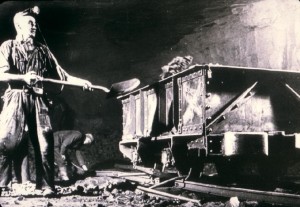 The dewatering equipment appears to have been set up in stages from the depths of the mine to surface. The drainage water would have been pumped from the deeper sections of the mine and utilized for dust mitigation in drilling operations. Given the limitations of the materials available in the late 19th and early 20th century, one is lead to believe that the water would have been pumped by a network smaller pumps that would then feed a high volume pump located on the east side of the main slope at a distance of ~1300 ft from the entrance to the mine. This type of arrangement would have reduced the operating pressure required to move the water to the surface as the differential head across each pump would be reduced.

The “main” pump we have seen in the mine is a triplex piston pump. Installed on the discharge piping on the main pump is a pulsation dampener. This vessel is used to reduce surging in the piping as it provides room for expansion in the line and would protect the piping from pressure surges so that it would not be dislodged from it’s very basic wooden supports.

The air supply for pneumatic tools runs down the slope with several takeoffs available for the miners to connect their drills and other equipment.

The power house and the compressor which would have been stationed on surface near the entry to the mine are now long gone which leaves many questions of the mine operation unanswered.

The remainder of the utilities consist of telecoms and electrical which are run throughout the mine and would have been repositioned as required as each area of the mine was no longer considered feasible to mine.