We had a very productive morning with efficient deployment of the dive teams. Cas Dobbin and I did a 2-hour dive with the goal of reaching major targets in the 120 foot depth range and taking still photos. Steve Lewis lead the survey team with Sabine Kerkau and John Olivero, while Phil Short and Gemma Smith pushed the gold line further out. About an hour into our dive we crossed paths with Gemma and Phil and took photos of them at work then met Steve’s team during our decompression. 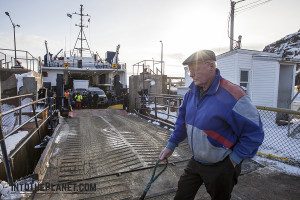 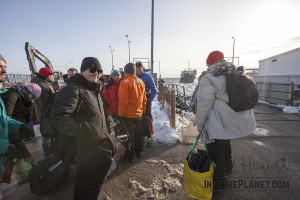 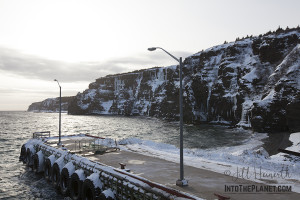 After the dive, Cas and I began our medical scans while I spoke with a reporter from Canadian Geographic Magazine. Soon after we received word that we needed to get off the island early in case of transport issues for the ferry. It is a transitional time right now for the Bell Island Ferry system. A new ferry named Legionnaire is coming online for the 100 anniversary of devastating battle that took place in the First World War. The Newfoundland Regiment advanced on Beaumont Hamel on the morning on July 1, 1916 losing the majority of their regiment during the battle of the Somme. In a single morning, almost 20,000 British troops died, and another 37,000 were wounded. The Newfoundland Regiment had been almost wiped out. When roll call was taken, only 68 men answered their names – 324 were killed, or missing and presumed dead, and 386 were wounded. Each day as we travel to and from Bell Island, we are ferried on a vessel named Beaumont Hamel.

In order to circumvent any delays from commuting, we made a team decision to book lodging on Bell Island for the remainder of our dives. Kind owners of the Grand Wabana Inn have offered to take us in so we won’t be facing weather delays. Tomorrow weathermen are predicting 100 kph winds and significant rain. Getting off Bell Island would be unlikely. So we will hunker down in the Grand Wabana Inn and see if we experience any of their fabled ghost sightings.