by Jill Heinerth – Into The Planet 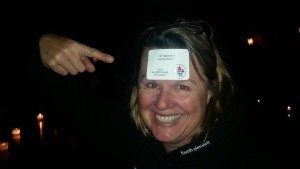 The Canadian Association for Underwater Science annual Scientific Diving Symposium was hosted in St. John’s Newfoundland this year with perfect timing. Our team put in a good performance. Neal Pollock gave a seminar on Physical Fitness for Scientific Diving. Rick Stanley and Phil Short gave an excellent talk on our project and surprised us will a 3-minute video clip edited by our extremely talented cameraman Cecil Johnson. He stayed up to the wee hours of the morning to prep a fabulous preview of our project. I ended the day with the Keynote talk on Operational Dive Safety. After a meal at Yellow Belly’s in St. John’s and some rousing conversation I had to rush off to the airport to catch an 11:15 pm flight. Freezing rain was on the way and it was advised to try to get out to Halifax instead of awaiting my morning flight. I would not be too worried about flight delays, except I have to get to Chicago to the Our World Underwater Dive Show to host the Friday night Film Festival and give some presentations on our project. No rest for the weary. Sleeping on the airport bench, awaiting my dawn departure from Halifax now, I am officially tired.