Jill Heinerth – Into The Planet

We awoke to screaming winds and were worried about getting across The Tickle to Bell Island. 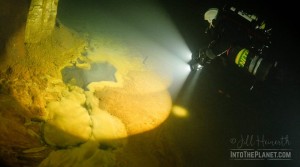 We packed everything we could and rushed to the ferry. At the dock, the winds were blowing 80 kph and getting stronger but most of us got across on the last boat before they had to suspend service. With winds increasing to 100 kph, one team vehicle and important equipment was left behind at Portugal Cove. Rick and Debbie Stanley will never say never. They grabbed the critical gear including shoulder height T-cylinders of oxygen diving gas and loaded it up in their inflatable RHIB. In gale to hurricane force winds, they made the dangerous crossing to deliver the goods to keep the expedition running. Torrential rains are continuing to pour down and fill the boat quickly. Every two hours, a team member will need to go to the dock and bail the boat. It is so rough and wild, we are unable to pull it or secure it any better. Just the act of bailing is risky in this weather.

Meanwhile, thanks to Tricky Rick and Debbie Stanley, we had a stellar day in the mine. The rain has decreased visibility due to runoff, but we managed to lay lots of new line. Phil Short and Gemma Smith dumped two more large reels of permanent guideline While Cas Dobbin and I continued with photo and video work. Sabine Kerkau continued documentation of artifacts with John Olivero and Steve Lewis finished a significant amount of survey work.

Medical tests on the dive team continued and we have discovered that there are some incredible learning opportunities form this study. I’ll save the medical news for later in the blogs, since a single day of information cannot really be treated as much more than anecdotal evidence.

After a very long day, we returned to the Grand Wabana Inn, where owner Alfred Hynes literally opened the door and took in the entire stranded team. We have grown to 20 people from off island in addition to mine safety staff, so there will be some cozy sleeping conditions tonight. There may be a fight for the extra couch downstairs if the snoring gets too intense! We’re all very tired. Mary from Dicks’ Fish and Chips by the ferry dock generously sent over fresh hot pizza and garlic sticks for us for dinner. You simply cannot be a stranger on Bell Island because the kindness of the local residents is overwhelming. We have had so many visitors and volunteers helping us out in our quest and their generosity is quite humbling.

At nearly 130 feet of depth, Cas Dobbin and I slowed to look at a broken ladder. On the floor, we saw billowing piles of iron bacteria. But what caught my eye was a tiny cross on the wall; a sign left to indicate where a miner had lost his life. These moments give us pause to remember all the people lost while working hard to support their families; the men in the mine, the lost sailors and those that went to war.

Doris is just one of the many people taking care of us on Bell Island. Hot soup, fresh baking and great sandwiches are never far from reach.